The War and Its Aftermath 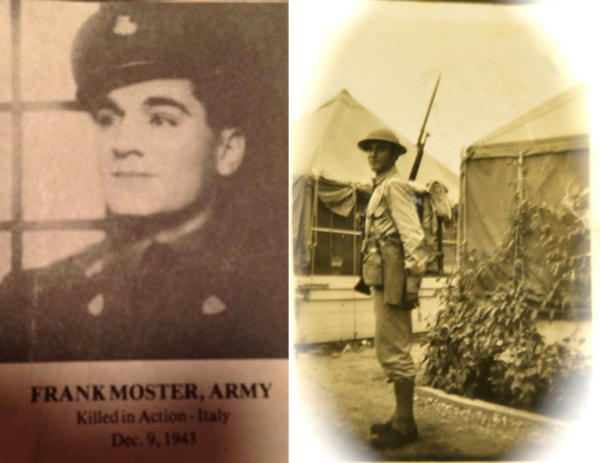 Frank in his Class A’s and fitted out in field gear. 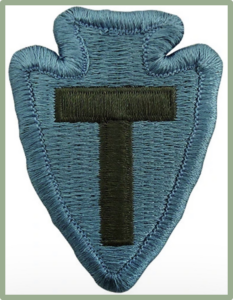 The unit insignia — worn as a patch on the left shoulder of the uniform — has much the same function in modern warfare as heraldic symbols on ancient shields and tunics. The 36th Infantry Division of the US Army, based in Texas, uses the letter T inside an arrowhead as its insignia, giving those soldiers the nickname T-Patchers.

Frank was a T-Patcher in the 143rd Regiment of the 36th Division.

From the website of the Texas Military Forces Museum at Camp Mabry in Austin, Texas:

“On 25 November 1940, the Division was mobilized for World War II, with active duty station at Camp Bowie, in Brownwood . . . and in April 1943 began its move overseas. It landed in North Africa, conducted amphibious training and on 9 September 1943, landed in Italy at Paestum in the Gulf of Salerno. The 36th was the first American combat division to land on the continent of Europe.

“The Division fought in the Italian Campaign as part of the 5th United States Army in such notable actions as Mt. Lungo, San Pietro and the Rapido River. In the Rapido River action, the Division lost the better part of two of its three regiments – 141st and 143rd – in unsuccessful attempts to cross the river . . . made to divert German troops from the landing of allied troops at Anzio. On 25 May 1944, the Division landed at Anzio and led the breakout toward Rome. The Division captured Velletri on 1 June 1944, and opened the gates of Rome for the 5th Army. The Division was then pulled out of Italy and landed on the beaches of Southern France on 15 August. Driving up through Southern France, the 36th was attacking and breaking the Siegfried Line when the

war in Europe ended. The 36th had spent 400 days in combat, accepted the surrender of Field Marshal Hermann Goering, won seven campaign streamers for its colors, taken part in two assault landings and 14 of its members had won the Medal of Honor. The Division had the ninth highest casualty rate of any Army Division in World War II.” 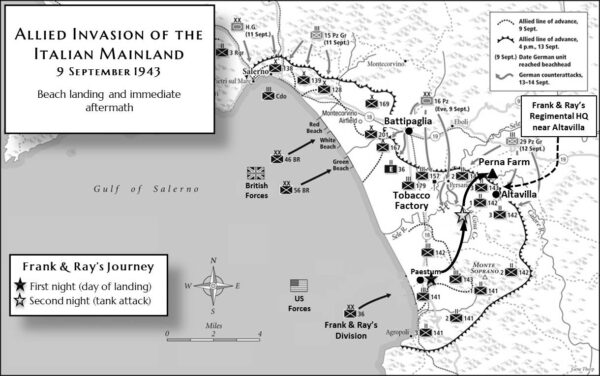 Frank’s regiment — the 143rd of the 36th Division — was among the first ashore in the bloody landings at the south end of the Gulf of Salerno. After one night at Paestum, his unit was on the move again. A German tank offensive in the middle of the night along La Cosa Creek separated Frank and his buddy Ray from the rest of their company. It was while they were trying to make their way back to the rest of the American forces that they stumbled upon the Perna farm. German counteroffensives against Altavilla, Battipaglia, and the nearby countryside kept the Allies pinned down close to the beach from September 1943 until they finally launched the assault toward Rome in December. 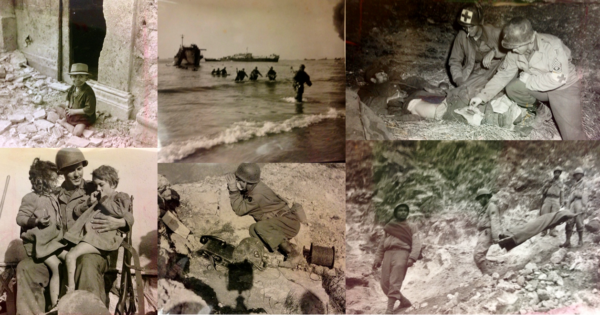 Scenes from the Italian campaign, clockwise from top center: Landing on the beaches; medics tending a wounded soldier in the field; bringing the dead and wounded down out of the mountains; an observation post; GI comforting two Italian children; a young boy sitting in the rubble of a bombed-out building.

<placeholder for picture of ruins of San Pietro> 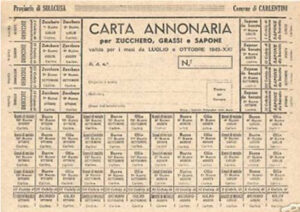 Even after the liberation, life was hard for the Italian people. There was so much destruction to be removed or repaired before anything even resembling normalcy could be restored. The Italian currency was essentially worthless, and the basic staples of life were rationed. Families received “points cards” like the one shown here that designated how much food they could get. The allowance was barely subsistence for the family, and those who had taken in orphaned children or others with nowhere to go couldn’t get extra for the members of the household who were not blood relatives.